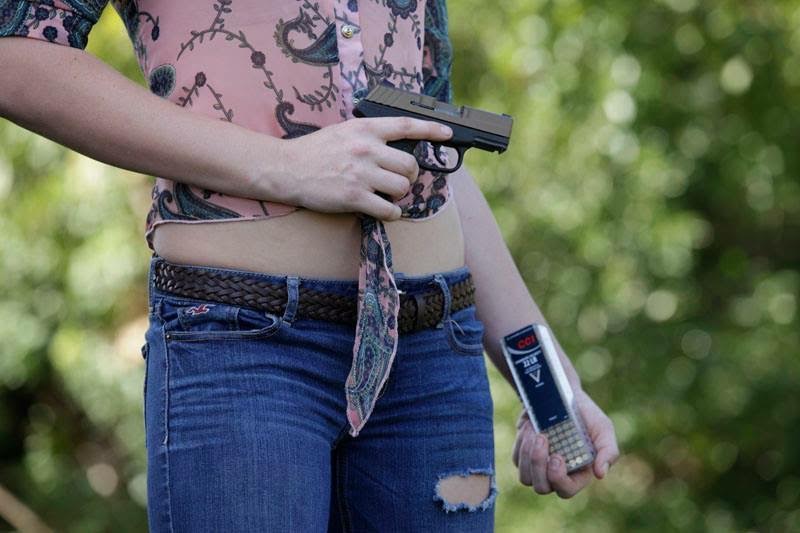 1.Handle all firearms as if they are loaded- Even if your weapon is safe and clear, with a cable lock through the magazine well and out the ejection port, you should still treat it as if it were loaded. It’s just good practice and reinforces the other safety rules.

While listening to a block of instruction from a law enforcement professional, SWAT guy, and colleague I witnessed something strangely out of character for professionals in our trade. Standing in the middle of the classroom and holding an empty Glock 17, the instructor proceeded to lock the slide to the rear, show an empty chamber to the class, and slam the slide forward. Then, this officer did something that gave me pause; he pointed the handgun at his chest and made a circular motion with the muzzle while pulling the trigger. A “CLICK” echoed through the room and the conscience of every SWAT guy in the room. No one said a word, including myself. Mind you, this colleague was a career cop, SWAT operator and Lieutenant! He wasn’t even wearing soft-body armor when he did it.

I’m really not interested in parsing the reasoning behind this foolish demonstration. Whatever the reason, what he did was fundamentally wrong and sends a poor message to junior officers, much less to the rest of the less experienced public. I’m just happy no one outside of our organization saw this ridiculous display of willful disregard for a fundamental aspect of firearms safety. Oh yeah, and he didn’t shoot a hole in his chest…that’s good too.

2. Do not cover yourself or anyone else with the muzzle of your weapon that you do not intend to shoot, damage or destroy- The “laser rule,” if you will. It’s a very simple concept and probably the most important rule: Imagine a laser beam extends out from your barrel. Never cross this imaginary laser over something that you don’t want to shoot.

If you follow this rule, even under the worst-case scenario, your negligently discharged round will likely land in a dirt burm, concrete floor at your buddies feet, or some other non-human barrier that you were pointing your weapon at. Granted, you and those around you might suffer some tinnitus but that’s a lot better than if you hadn’t followed this rule. Best-case scenario, you put one out of the 10 ring or into the clearing barrel.

Not following this rule assumes that you, at some point, “laser” yourself or another person with the muzzle of your firearm. If in that instance you unfortunately negligently discharge your weapon, the result will be a wounded or fatally injured officer or civilian. Even if you don’t hurt yourself, think about the guilt associated with being responsible for the death of a fellow officer, family member, or stander-by. Think about living with the guilt of knowing how much pain you caused to the family members of the one whom you hurt or killed through your own negligence. That’s not something I want on my conscious. That’s also a reason why in law enforcement we are responsible for every round we fire. So, I’m always mindful of where I point my weapon, regardless of the weapon system or whether it is loaded.